This Annex 58 subtask 4.1 involved empirical validation studies on full-scale buildings, aimed at determining the reliability of detailed building energy simulation programs to predict the energy and environmental performance. It involved a high proportion of the Annex 58 participants.

There is a marked lack of high quality datasets from real buildings (as opposed to test cells) suitable for validating dynamic thermal simulation programs, but fortunately the number of high quality test facilities is increasing, as identified in a detailed survey in Subtask 1 of the Annex 58 research. An appraisal of available test facilities for empirical validation was undertaken at the start of the Annex. The Twin Houses, a Fraunhofer IBP experimental facility at Holzkirchen, Germany, were selected. Two experiments were conducted: the first in summer 2013, the second in spring 2014.  A comprehensive validation methodology was adopted. This comprised experimental design, developing a detailed specification, undertaking blind validation where modelling teams were only given boundary conditions and asked to predict internal conditions, results analysis, a second phase of modelling after all measured data were released, and re-analysis. Over 20 modelling teams were involved in following the experimental specification and submitting predictions using a range of commercial and research programs.

The pictures show the Twin Houses – preliminary testing showed they had similar air tightness and heat loss characteristics. These are relatively simple houses, but are of realistic dimensions. One important feature of the designed experiment was to use two essentially identical buildings in a side-by-side configuration with slightly different experimental set-ups, so that not only absolute comparisons of measured temperatures and heat fluxes could be made with the predictions but also measured and predicted differences between the two buildings could be compared. The houses were highly instrumented; detailed climate measurements were also made on-site. Each experiment comprised comprehensive experimental test sequences of almost 2 months duration in order to fully test the dynamic response of the buildings. 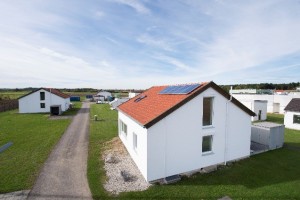 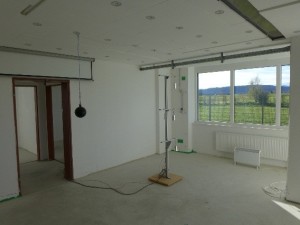