During the last 10 years evidence has begun to emerge of significant energy underperformance of new and renovated dwellings relative to that predicted at the design stage. This has resulted in the existence of what has become known as “The Performance Gap”. At the outset it is important to make clear that the performance gap discussed here does not refer to performance in-use, important though that is. Performance in-use is a complex function of a dwelling’s fabric & services, coupled with use and user behaviour and is not something over which a developer has direct control unless they also engage in housing management. Rather, it refers to the performance of the technology itself; for example, the gap between the theoretical and actual thermal transmittance of the thermal envelope or between the theoretical and actual efficiency of a heating system, all of which are under the direct control of the developer, designer and constructor.

Given that many dwellings are designed to just meet, rather than exceed, building regulatory standards, it is likely that, in a significant number of developments, dwellings will fail to achieve national regulations. The full extent of the performance gap across dwelling production, as a whole, is difficult to determine since the number of studies is small. However, the evidence indicates the existence of an underperformance risk that cannot be ignored. What is more, as Europe seeks to establish difficult and exacting near-zero carbon standards for its new housing and similar standards in the renovation of existing dwellings, the capacity for underperformance will be increased.

The policy implications of a performance gap are considerable since European energy and carbon reduction policies place a very heavy emphasis on improving the efficiency of its building stock. In theory large reductions can be made in this sector but the policy will be seriously undermined if the performance gap is not closed, and just as important, kept closed. The key question is; how can this be achieved?

For some 20 years I have been trying to understand how the house building industry in the UK delivers energy efficient housing. During this work I have come to the conclusion that eliminating the performance gap in mainstream house building and renovation will require action in three fundamental areas: These I have called the three pillars of performance, which are illustrated in figure 1. 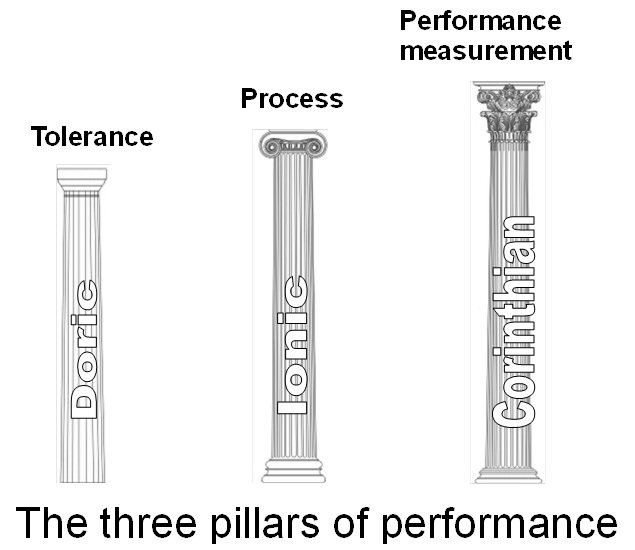 Tolerance based design and construction.

In applying our building energy models, there is a tendency to calculate performance as if buildings were constructed to perfection. In design drawings everything fits perfectly and when we calculate U values or even undertake numerical modelling of complicated junctions we assume that what is drawn will be constructed. There are construction defect surveys going back decades that demonstrate that this is not the case. What is lacking is an understanding of design and construction tolerances. In other areas of engineering, tolerance is defined and allowed for so that the required performance is achieved. In structural engineering we use factors of safety to be sure that structures do not fail. Allowing for construction tolerances rarely happens in building energy modelling and design. Given the rather naïve assumptions we make, it is hardly surprising that, when measured, whole dwelling heat loss (for example) is much higher than predicted, sometimes by over 100%.

But: what tolerance should we allow for? The field trial evidence of completed dwellings suggests that performance distributions are very wide and defining reasonable tolerances almost impossible. Production variability, from which tolerances are derived, is a function of the type of technology used and the design and construction processes adopted. A technology that is difficult to get wrong and uses well controlled design and construction processes is likely to have a much narrower distribution than one that is difficult to construct and is poorly controlled. Unfortunately there is very little data on which to base a tolerance specification. This knowledge gap needs to be filled as a matter of some urgency.

Good process control starts with buildable designs that do not themselves contain design errors they then continue with good communication of design intent to site, and well tried and tested construction processes that are checked and measured along the way to ensure that performance is within specified tolerances. Given the low carbon standards that underpin European energy and climate change policy, it is crucial that tight process control becomes the norm in all developments. Achieving this will require a great deal of work to understand the control problems and develop the sophisticated techniques that will be required.

As manufacturing systems engineers know very well, any production process is prone to error and performance drift. In well controlled processes, these tendencies are kept in check using a regular testing and inspection regime. Where tests indicate that errors have crept in the process is reviewed and corrected so that subsequent production performs as required. In construction, visual inspections are carried out as part of quality control but in the area of energy performance, inspection cannot detect underperformance and, crucially, checks are usually used to correct visual faults in a particular instance rather than correct and bring back on track the whole production process.

This last point is important since without process correction all that quality inspections do is enable a series of one-off corrective actions, which are likely to represent the tip of an underperformance iceberg. Most underperformance lies in elements that are covered up and, once built in, are almost impossible to correct even if they were detected.

Performance cannot be assured without measurement of enough partially and fully completed dwellings and/or dwelling elements to ensure that processes are working. Just as design and construction processes need to be controlled so do measurement and testing processes. They need to be undertaken both during and at the end of construction. The role of in-production testing is to enable corrective action as construction proceeds and identify in-line process problems. The role of end-of-line testing is to verify overall performance so as to provide a general check on the whole process. Of course, measurement will be on a sample basis, as in other manufacturing, but its role in providing feedback is crucial. In well performing processes full scale end-of-line tests do not need to be undertaken in large numbers but they are, never the less important.

The role of governments in supporting the industry through what will be a difficult process is vital. In the first instance they need to engage in a research and development programme to develop the testing and measurement processes that are required, for these are sadly lacking. Without the measurement tools, it will be almost impossible to achieve real performance in mainstream house building.

The transition to a construction industry capable of building low carbon housing in almost all of the dwellings it produces will not be easy since it will involve considerable reengineering of the industry and its supply chain based on the three pillars of performance. It will be an industry where real performance, as measured by full scale in-situ testing, is king and where those who demonstrate an ability to produce low zero carbon housing in reality, will thrive and those that cannot will wither away. It is crucial that governments and all parts of the construction industry work together to find ways of building low carbon housing robustly and; for real!